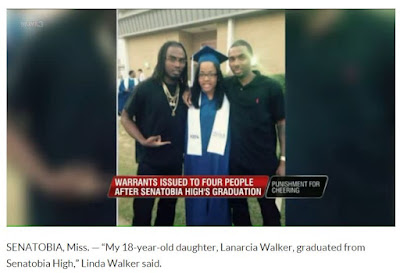 If you happen to be planning to attend a high school graduation in the WTF backwater called Senatobia, Mississippi then you had BETTER not plan on cheering.

Because, if you do, you'll be kicked out and then they might even figure out some way to get the local police department to issue an arrest warrant for said cheering in flagrant disregard for the assholish rules against it.

Warrants issued for people who cheered at Senatobia graduation in which the aunt of a graduating senior was unable to contain herself and shouted her niece's name as she crossed the stage to get her diploma. She was kicked out of the graduation ceremony and then, a couple of weeks later, got papers threatening her with jail for "Disturbing the Peace" at a high school graduation ceremony by shouting one word.

This is really nothing but school administrators being assholes and I'm going out on a limb and saying there's a deeply racist element going on here too. No idea if SuperNintendo Foster is a white man but I'm going to assume he is or he's been in the system long enough to be "whited" into administrative dickbaggery like this.

This is the same mentality of forcing kids who cannot pay a $10 fee to attend the school's carnival to sit in a darkened auditorium and LISTEN to their classmates have fun. Don't believe that happened? You'd be sadly wrong.